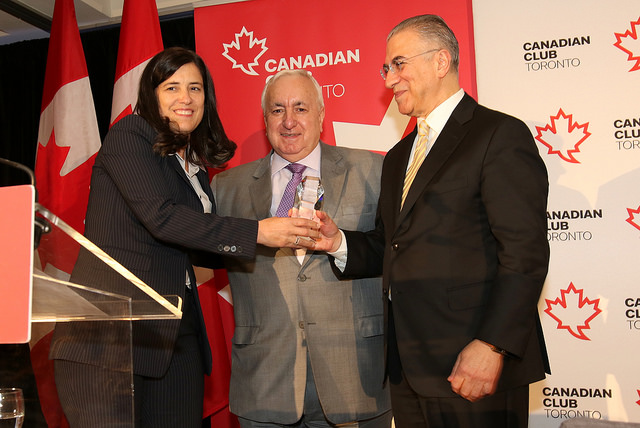 The Canadian Club of Toronto presents a “Canadian of the Year Award” annually ”to distinguish and recognize those whose efforts and example have improved the lives of others and inspired us as a nation”. This past May, the Club recognized Lifeline Syria for leading the community engagement initiative in assisting Canadian citizens and permanent residents becoming sponsors and assisting the resettlement of displaced Syrian refugees.

Frank Palmay, Chair of the Board of Directors for Lifeline Syria, highlighted Canada’s track record of extending lifelines to asylum seekers.  Canada’s lifeline was extended to Hungarian refugees in 1956, whereby 40,000 Hungarians benefitted – including his family. Next, the lifeline was extended to 60,000 refugees from Cambodia, Laos and. Palmay highlighted the uniqueness of Canada’s private sponsorship program, which allows groups of citizens and/or permanent residents to unite and commit to supporting one or more refugees. This process of Canada-based groups extending a lifeline to refugees continued in 1999 to Kosovars, in 2006 to Karen people of Thailand, and in 2015 to both Bhutanese and Iraqis fleeing wars.

During the 2015 federal elections, the plight of the Syrian refugees and Canada’s response became a significant issue.  Justin Trudeau and his party promised, if elected, to bring 25,000 Syrian refugees to Canada by the end of the year.  The Canadians elected them and by the end of February 2016, the pledge of 25,00 refugees was met.  Additionally, almost 20,000 additional privately sponsored Syrian refugees were given permission to come to Canada.

Mr. Palmay attributed Lifeline Syria’s success, for which it was being granted the prestigious award, to its collaborative efforts with individuals and partners, “…this recognition rightly belongs to them”. Along with its founders Ratna Omidvar and Mohammad Al Zaibak, acknowledgement was given to past and present members of the Board of Directors, volunteers, the Refugee Sponsorship Support Program (RSSP) and their pro bono lawyers, Ryerson University, COSTI Settlement Services, collaborating Sponsorship Agreement Holders, and the Toronto Foundation. Special thanks was extended to the Province of Ontario, the City of Toronto, Slaight Family Foundation, Maclain Foundation, J.W. McConnell Family Foundation, Laidlaw Foundation, Counseling Foundation of Canada, Toronto Law foundations, TD Canada Trust and Scotiabank.

Palmay lamented the newly-implemented procedural hurdles and introduction of caps, stifling Canada’s support efforts. He implored the Canadian government “to keep the Lifeline to Syria open and effective”, as sponsors are left frustrated, thousands of refugees left stranded, and millions of dollars of sponsorship funds “sterilized”.

A video of some of the highlights of the Syrian refugee and sponsorship experience was shown.

The luncheon concluded with a panel discussion on the private sponsorship process, moderated by CBC’s Susan Ormiston, and shared perspectives of Lifeline Syria, a Syrian refugee, a Sponsor, and a Lifeline Syria Board member. Heba Alhabyan and her family were sponsored by Anne Marie Chudleigh and her siblings. They recounted the sponsorship process from both the perspective of the sponsors and the sponsored family. Ann Marie then gave a heart rending story of how Heba helped her through a very difficult family crises.  Every member of the audience was moved and it reinforces the reality that welcoming refugees can benefit both the refugees and the sponsors.

It was a memorable celebration as Lifeline Syria was awarded not only for meeting its objective of assisting 1,000 refugees in becoming permanent residents in the GTA, but in doing so for many more and much sooner than their 2-year deadline, June 2017.

To read more (and to see photos), click here.

The webcast can be accessed at: http://www.mediaevents.ca/canadianclub/20170512/